- October 22, 2018
I would start with a small story of a Shop Owner Ram & his customer Anuj. Both of them are very Honest people. Anuj was a regular customer of Ram. Anuj used to buy from Ram all month and would make the payment in starting of next month. They both used to maintain their Hisab in their own respective diaries. One day Anuj visited the shop. He took whatever he wanted and told Ram to write in the diary. Ram was really busy with other customers so he told Anuj that he would write it later. Later that day, Ram wrote Anuj's Hisab in his diary. Then days passed Anuj continued buying from Ram. The next month started, Anuj came to the shop for the payment. There was a mismatch in Hisab Kitab of that day which made Anuj really furious.

Here Ram was in a complicated situation, whether to trust  Anuj or Trust his own Hisab which he does not remember as it is more than 20 days old.

Trusting Anuj might make him lose money while trusting his own Hisab can end into losing a customer like Anuj.

Each Ram has a number of such Anuj. The business between them happens because of the trust they have in each other which should never be lost. So, to keep this trust strong there is a need for Transparency. Where both the parties get notified when the Hisab is updated or they have access to each other’s copy of their Hisab Kitab.

This is one of the key issues we are trying to solve. 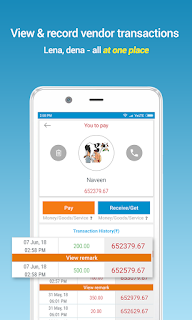